If you have followed my blog you know that I've lost some work hours for next year as my principal was trying to add new programs to our school. While I still have decreased hours, all of his grand plans have gone down the drain as my school district has a 19 million deficit for the 2010-2011 school year. We have had a district wide hiring freeze for over a month. Leaving us without a new 4th grade teacher or a middle school math teacher.

I'm sure any teacher has been in this situation before and knows that in the end it usually works out...money is "found," budgets are re-arranged and life goes on. I am wondering how things will work out this time though.

Today is a HUGE school board meeting where they will announce the cuts they are making for the fall. They want to make cuts that effect schools across the board, not just the poor or the rich schools. Right now the major plan is to cut PE from all the elementary, middle and K-8 schools. Then they plan to cut the SPED and ESL programs by 25%. I think music already did layoffs earlier in the spring.

Ironically there has been no mention of cutting art. I think that is because there are so FEW art teachers left in the district, especially at the elementary and middle level, that even if they got rid of all of us it wouldn't make much of a dent in the budget deficit.

I think all of the cuts proposed would really hurt our school, but loosing ESL programing would be a huge blow to our 69%+ ESL population. It is not an equitable cut. Cutting, music, gym or art would be equatable, but ESL/ ELL no way. The simple fact in Portland is that the lower income schools have much higher ESL populations than the high income schools. By cutting ESL programs the high income schools will not be impacted the same way that a school like mine would. To them the loss of a ESL teacher may be an annoyance and disappointing impacting a handful of students. To us it is a disaster, especially when you look to the future and think of how the loss of services will impact students state test scores and how test scores impact a schools ability to get money and services.

I wait with an heavy heart to see the outcome of tonight's meeting.

On a fun side here is a new photo of my chickens all grown up and my new "Lady GaGa" haircut as the kids like to call it. 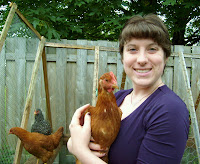