money makes the world go round 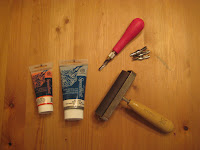 maybe i can print my own money....
Dear reader,
Some of you will find this post tacky or whinny but it's my blog and I want to lament about my lack of budget. In my district art teachers are so far and few between that the district does not have an art budget. It is up to each school to pull from their general funds to create an art budget. This means some schools allocate several dollars per student while other schools allocate pennies per student for materials. Without a doubt the SES of each school's community impacts the art budget.

My school is on the low end of the SES scale and over the years our student body has grown and our PTA has disbanded. This year I was allocated .88 cents per student to buy supplies. By the request of the school principal I used half of my money at the start of the school year. I was told I would receive the other half of my budget to use on February 1st. I prepared my 2nd supply order and turned it into the office on the 1st. On the 5th I was given my supply form back with a note that said that there was no money left to buy supplies.

That's impossible, I thought. My budget is in a special account and only I can access it. Obviously there was confusion about how much money I had used that year. Turns out my budget money was never put into my account and was left in the general fund and used by the whole school. Unfair or not their is no money left to order supplies for the rest of the year. The school will continue to provided photocopy paper till the end of the year and nothing else.

There are two major problems here. First, I'm missing half of the supplies I need to get though the year. Second, and even worse, I have not been frugal using our current supplies because I fully expected to replenish everything this month. At this moment I have two bottles of red tempera paint to my name.

I have spent the last week trying to find ways to get money or supplies.
I wanted to have a art room fundraiser but the leadership team has said no. It was decided at the start of the year that we would refrain from fundrasing this year. Since 94% of our students are free/reduced lunch they do not want to burden families by asking for money in these tough times. There goes that idea.

So I will have to get money elsewhere. I have a donors choice project in the works that hopefully will get me some supplies and I'm searching for other small grants. I'm hoping to tade my 200lbs of unused clay with other district art teachers for some tempera paint, glue and construction paper. I hope I get some more amazing ideas because .44 cents per student is not going to cut it as a acceptable budget for this year.
Posted by Mrs. Art Teacher at 7:21 PM