first lessons...the good and not so good 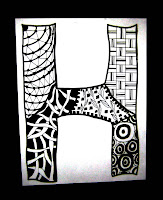 For the first lessons of the year I wanted something that had to do with names or first initials. I also wanted to use limited supplies and see where my new student's skill levels were.

One class made radial name designs that many people have done before and posted about. I remember doing these when I was in 6th grade. As always they turned out well. 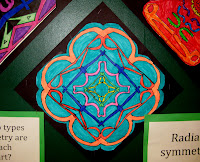 My other two classes were supposed to think about pattern and balancing positive and negative space by making Zen Tangle initials. I think this lesson could be a winner but I let things get a bit out of control and ended up with mixed results. First I had students make bubble or block initials. This part went just fine. Then I had students brainstorm different patterns and gave some pattern idea sheets to each table. Students needed to divided their letter into 5 or 7 sections and draw a different pattern in each section. I limited them to black and white (so sharpies). Things were still going ok at this point. I kept having to encourage the kids to use a balance of black along with the white in each pattern but that is normal. If I had stopped the lesson here things would have been great. Here is a student who didn't get around to my next step. (He was working really hard and did a great job)

and another nicely done letter 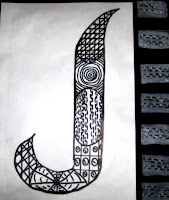 But then I just could not leave well enough alone. I wanted the kids to make a boarder around their letters and when I found scraps of e-z but lino I decided they should carve stamps. I must say they did a pretty decent job with the carving...but the stamping got pretty messy. I realized my new room didn't have any brayers (even though I found tons of other printmaking materials...where did the brayers go?) So we ended up brushing on tempera paint. Then I had some kids brush on printing ink. Some of these turned out ok... 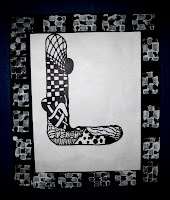 would have worked better with correct printmaking materials...but overall ok 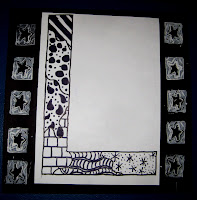 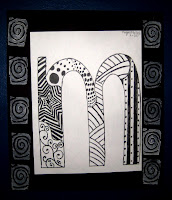 found the printing ink! Much better!!

But then my third class just made a mess of theirs. I had them work on colored paper with black paint so I could keep the classes separate for grading. They got black paint all over, stamped half on and half off their papers, didn't bother spacing their stamps....who knows. Each class has their own personality I guess. Let's call some of these the not so goods.... 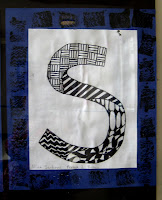 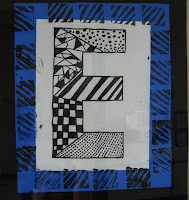 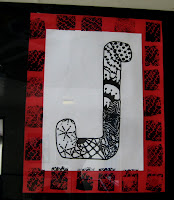 and MORE messy stamping! yet the letter was so well done. 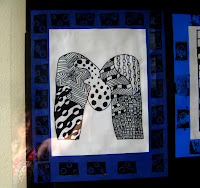 Yahheee... a good letter and good stamping...one of only three from this class

I still think this lesson has great potential. Either just do the letter and stop or make sure you have the correct printmaking materials and have the kids practice stamping and spacing a lot before you let them have at it. I still don't know why one class ended up with such sloppy work while the other class was simply hindered by my lack of correct supplies.
Posted by Mrs. Art Teacher at 5:15 PM