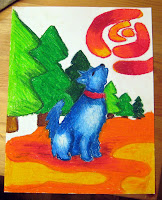 Well a few people showed interest in doing a collaborative lesson...or at least were enthusiastic about the prospect of something Franz Marc inspired.

I've been trying hard to do research on Franz Marc and finding surprisingly little. Marc was a young German man who was interested in theology but the son of an artists and as a young adult attended art school. He came in contact with Van Gogh, Matisse and Gauguin. He shared Van Gogh's interest in spirituality and color symbolism. I see why he liked Gauguin's saturated colors and Matisse's organic shapes, Fauvist colors and less realistic drawing style. I learned he died at age 36 when killed in WWI and I have found a few quotes from his letters to Kandinsky who he founded the Blue Riders group with. The other books and articles I have found about him are in German, and while I took 6 years of German in school, I'm finding my translating abilities to be limited.

There is a Scholastic Arts from 2009 about Franz Marc called Working with Color. Anyone have a copy of it? I'm having trouble getting my hands on one.

So onto the lesson. I'm going to try a few different approaches and post them. I also encourage anyone else with ideas to make a sample and post it. For this first try I only used oil pastel and did the animal first and background second. I asked my husband what animal he would be and what color would symbolize him. He choose blue and a dog and then specified our dog Dexter. OK I said. For the setting he choose the forest because we like to go camping and he wanted to look up because he is an optimistic person so I have him looking up at a star/sun thing.

I started by drawing the dog and my first drawings were too realistic for a Franz Marc lesson so I had to loosen up my approach. I will encourage the kids to go simple and not too detailed. I also wish I had drawn my dog bigger. Then I made the setting, a sun/star thing, a pine tree and an organic shaped ground. 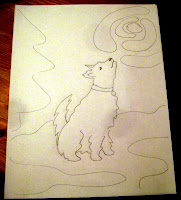 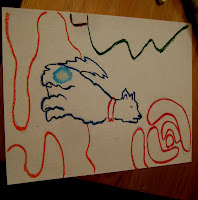 Next it was time to color the dog. I found a light, medium, dark blue and white. I tried to show some modeling like Marc did by choosing a few highlight areas and working my lights and darks. I would have to give the kids a lot of guidance on this part. 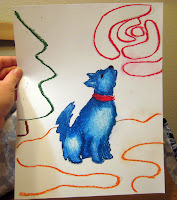 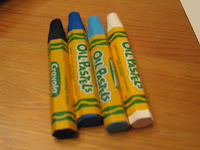 Next I found 3 oranges and worked on the ground making sure to put a darker orange/red shadow underneath my animal. This part was pretty easy. Next I went up to the sun/star and worked in reds and a little orange...also easy to do and demo to the kids. 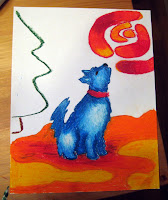 Over to the tree and I decided to add a row of tree's in the background that overlapped and got smaller to show depth and space. Maybe I should have left it be at just one tree. I'll stick to one tree in the next sample. Once again I found three greens and worked lights and darks.

and now we are left with the sky area. Part of me wants to use watercolor paint with it and salt but I don't know how Franz Marc-esque that would be. I'm also not sure about the sky color. A purple maybe?

So now it is time for feedback on attempt #1....what is on track and what could be done differently. For my next attempt I will do something with paint.
Posted by Mrs. Art Teacher at 6:57 PM