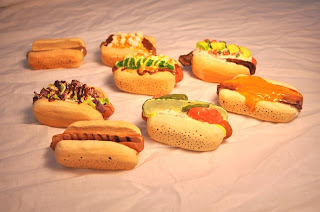 These really cool CLAY hot dogs are done by a childhood friend who is working hard to make a living with his ceramics. These hot dogs were going to be the inspiration for our clay lesson.

I had a surprising and, to me, rather shocking conversation with one of my 6th/7th classes today. We are finishing up pop art food paintings and are scheduled to then make those food out of clay and hopefully turn them into a lidded container. So I was explaining to the kids how many classes we had left in the year and how long it would take to make the clay and have it dry and fire and glaze and such.... basically that we need to be done painting by the end of the week so that we can start clay.
A few kids called out "I don't want to do the clay project." Oh  you know middle school students in the spring, complain complain. I responded that I'm sure they were not speaking for all 36 of their classmates. But then to my shock ton of kids started saying they didn't want to do clay. I told them we could vote at the end of class thinking that the kids were trying to impress each other and once they were voting on paper independently that they would vote for clay.  Well for the first time in my teaching career when the kids had a silent independent vote half voted no clay, a quarter voted yes clay and a quarter voted "either way is fine". I've never had a that many student's turn down clay! I'm shocked, my other classes love clay and are chomping at the bit to start the project. We have already done two clay lessons this semester so I am considering not doing the clay project as it will eat up a chunk of my clay supply and take a lot of time.
While I try to let my student's have some choice within each lesson, I have never let a class veto a project as a whole...but I hate to fight kids when it comes to clay.  Would you skip the lesson or push on forward?
Posted by Mrs. Art Teacher at 7:23 PM