This spring I got on the bandwagon and had my student's make a bottle cap mural. It was a simultaneously awesome and awful experience.  To say I underestimated how much work it would be to make the mural is to put it mildly. However, I am in love with the end results and so are the kids. However, my principal sadly is not...you can skip to the last paragraph to read about that part if you don't want to read the rest :(
This is how we made our mural and some things I wished I had known/thought of beforehand. I put my "take away" points for each step of the mural process in astricks so you can skim the post if you want. 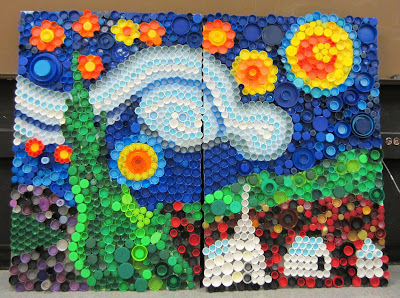 Creating the base for the mural:
** 1/2 plywood is very affordable and home depot will make two cuts for free for you**
***Block in the colors you are going to use in each section with paint***
The base of the mural is a 4x6 foot sheet of plywood cut in half. I projected a simple coloring sheet of Starry Night onto the plywood and had some kids trace it and then go over the lines in sharpie. Then we blocked in the colors we planed to use with some craft paint ( I put dots of paint in each section and then student's who were done early could go work on blocking in the areas) later this made it so much easier for lots of kids to work on the mural and know what went where. 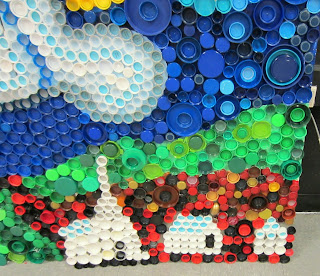 Collecting the caps:
**Start collecting caps early!**
**Go to local coffee shops and ask them to save milk jug lids for you**
By far the hardest part of this project for us was getting the caps into the classroom. Maybe it is because I work with middle school kids, maybe I didn't advertise the project well enough...all I know is the caps did not come pouring in as I had hopped. Eventually I put a collection bucket in the main office, in the lunch room  and in my classroom. I also put announcements in the student morning bulletin and in the parent newsletter. Putting a note in the parent newsletter helped some but not as much as I was expecting. Eventually I got caps 3 ways. 1 for every 5 caps a kid brought to me they got a Swedish gummy fish or sour patch kid. Yes this is food bribery but it worked. 2 several teachers offered extra credit points for caps...every 3 caps equaled 1 point. After midterm grades went home the caps came pouring in.
3. I went to the 3 Starbucks in the neighborhood with large empty cans from the cafeteria and talked the managers into collecting caps from the milk jugs for a week each. I'm hoping one of the Starbucks will let me put up he mural for a few weeks come fall.
AFTER this project was done a student brought me two paper grocery sacks full of caps and the caps just kept coming once families got used to collecting them. So I think a major lesson here is to start collecting the caps a few months before you plan on doing the mural. 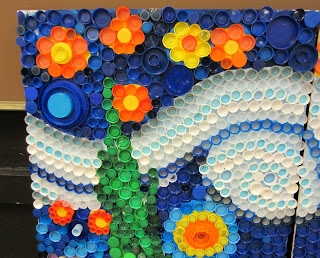 Sorting the caps:
** Soak batches of the caps you receive in dish-washing soap or a little bleach water or something so your mural doesn't start to smell of sour milk and other food**
**Have the kids sort out the colors into sub categories...not just "blue" but the different shades of blue**
***look at both sides of the caps for various color options and to create tints and shades***

Attaching the caps:
**pre-lay out the caps where you want them before letting the kids have at it with the glue gun OR have a few student supervisors**
**You are going to use a LOT of glue sticks***
We went the hot glue gun route and I am waiting to see how many caps have fallen off when we get back to school in a few weeks to decided if they need to  be screwed into the board or not. It is possible that I will write a post in three weeks about how I walked into the classroom and the entire thing fell apart and how upset I am.
Anyway placement of the caps was a big challenge for us. Putting everything together was a lot like putting a puzzle together. I strongly suggest doing any curved or circle or small detail areas first and then systematically filling in from either top down or left to right or something that helps you get a nice fit for all the caps. Having the base color in paint really helped hid areas where we had gaps in the caps.
I really had to keep an eye on where the kids would glue the caps. They would get excited and start gluing in areas that I had not laid out the caps for first. Eventually I trained a few kids to be "supervisors" and one of them had to be present to oversee the gluing of the caps if I was not available. This was a great job for those chronic early finishers. A few kids started layering smaller caps inside of larger caps and I think it added a really neat look to the mural. 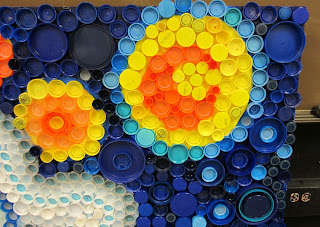 Hanging the mural:
**make sure you have a dedicated place to hang the mural**
I have yet to hang the mural. When it was all done I was thrilled with the results, so where all the staff members who saw it and so were the kids AND the 30 families that stopped by to see it at spring portfolio night, that is the most parents to ever take interest in my program. Want to know the ONE person not excited about the end results? My principal! Yes my principal who was on board for the entire project till the very when when she looked at it and decided she didn't know what "message" it would send to hang it in the hall because it looks a little (and I'm quoting her) "junky."  I am dumbfounded. I think it looks great and sends a message that the school supports art and recycling and creativity and collaborative activities.
Let's look a the mural again.... 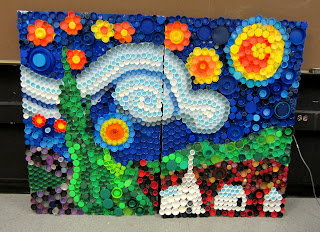 Ok junkie is not what comes to mind when I see that. I really hope she changes her mind come fall and let's me put it up in the halls. I was really hoping to put it in the library or near the office where lots of student's can see the mural. But for now I only have permission to have it hung up in my room. Even the custodian thinks it's a shame that it has to live in my room. My hope is to find  a store or coffee shop in our neighborhood that wants to display it for a few weeks and help show the principal that people will think it is awesome...not junkie.

So will we do it again? Yes we will. We still have a lot of caps left over from this one and I'm feeling more confident about the process. I think I want to make 2 a school year till we have a whole Gallery! For the next one I am thinking something by Matisse. Even if I have to store them all in my room till this principal retires I think the community art experience is worth it.