NOTE: I have 6-8th graders at the exact same time so I need to be hitting standards simultaneously. Right now we are doing identity for the 6th graders and perspective for the 7th graders (No 8th graders this trimester)

I mentioned that my students dislike having to do projects that feature their face. Just to test the waters I took photos of one 6th grade class. They were NOT happy at all. This is about as "happy" a face as I got 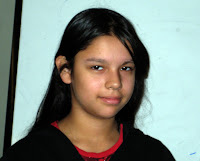 Can you say, "I hate this?!" This is not a battle I am excited to start.

So instead we did our eye drawings inspired by Esher. The kids did a decent job drawing their eye and image of something that was important to them. Their coloring was less then impressive though. Pushing forward I then gave them a pre-drawn eye and a graphite stick and showed them how to use value and shadow to create form on the eye. I loosely flowed the instructions on Art Projects For Kids. OH they liked that a LOT!

a few of our eyes

So the next day I brought out the willow charcoal and showed them how to draw a branch with correct form and shading. They also loved that and did a great job. We added some leaves in pen and water colored them in.

So far everyone is really enthusiastic about learning how to make things have form. So I pushed forward to one point perspective. On Thursday I showed the kids how to make blocks using one point and vanishing point. They did such a good job that we put our blocks in a large box. I asked the kids to draw a set of blocks that spelled their name, a word or a simple phrase. 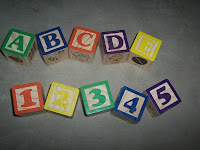 I bought two brand new set of blocks for this project and when second period left someone had colored all over several blocks with Sharpie....ARGGG stupid....little....

Next I was going to move onto two point perspective city's but realized that is an 8th grade requirement. Instead I found this great lesson that uses one point and incorporates a figure with correct shading. I fond it on Jennifer Lee's Artsonia page. This will be a great way for us to do perspective, shading with form and get thinking about people again. 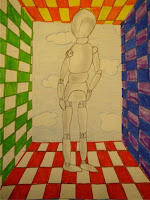 Then we can keep thinking bodies and skeletal systems to do some Day of the Dead characters. I will ask each skull to have a distinct personality. I love this Freida Klaho inspired one that I found on the web 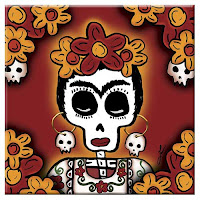 I just have to comment here, after working in a predominately Hispanic school, I have developed a better understanding of Day of the Dead and it's relationship, or lack of there of, to Halloween. They are two separate things. Day of the Dead occurs on the 1st and 2nd of November. While these dates match with the Catholic All Souls Day and occur after Halloween, they are NOT the same event. Day of the Dead has it's origins in Aztec ceremonies and other indigenous cultures. The immersion teachers at my school, all natives of Latin America, are insistent that we do not use Day of the Dead and Halloween interchangeably. Therefore, we do not do ANY Day of the Dead celebrations or artwork till post Halloween.

Let's keep going with figure and skeletons and create those wire and tinfoil people in motion. I just got a big roll of wire from SCRAP. 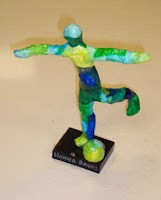 Slowly moving back into drawing people while still looking at perspective we will combine the falling people drawing (I like Mrs. Jahing's version) and cut and paste our drawing onto this perspective background from We Heart Art 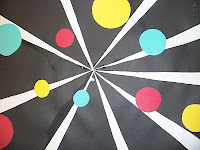 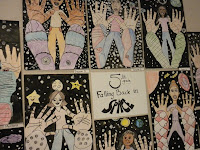 And then we are back to having to do a artwork with our face. Well I was cursing the net and decided to look at the school website of one of the best ranked Middle Schools in Portland (but not in my school district). Low and behold, there is their identity project...but the kids did not draw themselves! They altered printed photos of themselves using a variety of media and collage. Well if the blue ribbon school can do it so can we! 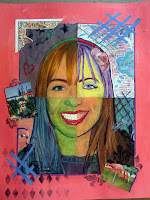 It still uses photos of the kids but at least they get to alter their photos! Maybe in the spring they will be ready to draw themselves, but for now lets just draw ON ourselves.
Posted by Mrs. Art Teacher at 11:52 AM