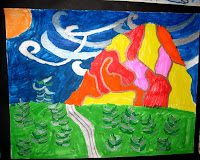 I'm originally from Colorado and I go home pretty often. One thing I love about Colorado is the varied landscape. Yes there are mountains ;) but there are also great plains, sand dunes and amazing mesas. Lots of artist have painted and photographed Colorado but I am particularly fond of a man named Phil Lewis who is a current day artist.

Phil's bold colors, recognizable images and young age make him a great artist to base a lesson on.
First I showed my students his artwork (they really liked it) to get them interested. Then I introduced the idea of rhythm and movement in art. We then went back to look at several of his artworks to find examples of rhythm and movement. The repeated lines in his sky, the waving arms of his tress, the use of tints and shades to create color. I told the kids to imagine they were standing inside one of his paintings. How does the air feel? What is the weather like? 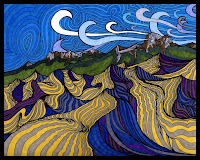 Next we thought of two landscapes we see in Oregon and choose the coast and Mt. Hood. Then as a group we did two brainstorm sketches one of Mt. Hood and one of the beach. We simplified each landscape so we could focus on rhythm and movement.

The next class we started by watching a really cool movie from Phil's website that shows him drawing, coloring and computer manipulation his artwork called "The Buffalo". It is a GREAT video. He is young and has his band's music playing in the background. But he takes time to talk about how making art takes time, how he has to be patient and practice his artwork. Most of the video is in fast forward but he slows down and show how slowly and carefully he works. What a great example for the kids. A young, hip, ALIVE artist who was not their teacher saying the stuff she naggs about all the time. 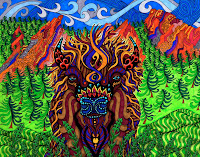 After watching the video we pulled out our two sketches (Mt. Hood and ocean) and each table got a pile of reference photos. Students started sketching out their individual drawings. We said there had to be trees or water in each drawing that showed rhythm. We also said that the clouds in the sky needed to indicated the wind direction. Students were asked to think about how they could create movement in solid forms...like mountains and rocks.

Finally I broke out the markers and sets of metallic knock off sharpies (from Target). I showed the kids how to use tints and shades to create interest and let them get to work. Everyone loved the end results! I think they really understood the idea of rhythm and movement. Make sure to check out Phil's website. 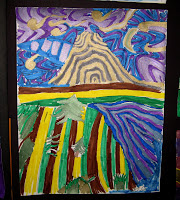 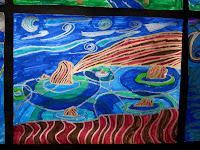