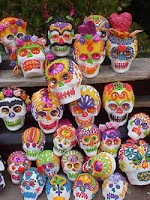 I was all ready to make a post showing photos of the great dia de los muertos celebration we have on Nov 2nd each year at my school. The fun of decorating sugar skulls, making day of the dead art and eating that sweet bread; pan de muertos:)

On Thursday, after school, I pulled out all my lessons for my k-4th skulls and skeletons that we do each year then went to find my best friend at the school, the 2nd grade Spanish immersion teacher. I wanted to know what time we would have the annual party.

I went to the Spanish immersion hall to find it void of the usual decorations? Odd. I went into my friends room to find her and two other immersion teachers having a very heated discussion...in Spanish of course. I said I was there to check on the day of the dead party and the kinder teacher, a passionate Nicaraguan, started yelling in Spanish. Ok... I reminded them that while my Spanish had improved I still was pretty slow on the translation. I had only picked out the words "he, stupid" and something the kids say to me under their breath when they are mad and I'm pretty sure means idiot. Well after I learned what was going on I felt like using the words stupid idiot also.

I guess some misguided parents, in a attempt to get the Harvest Dance back, had gone to the Principal and pointed out/complained that the immersion program was celebrating "Halloween" and having a party during the school day AND only inviting the other immersion students. They wanted the school wide harvest dance back. Did the principal say "Your right, lets have the harvest dance back!" or explain that day of the dead is part of the cultural education of the immersion program or agree that everyone should be invited to the party. No. You know what happened instead? The immersion programs dia de los muertos celebration got cancelled!! Upon consideration, our no parties, no holidays, principal decided that if the harvest/Halloween dance was not ok for public school that it was only fair that there no longer be a dia de los muertos party. Beyond that, there should be no more dia de los muertos art around the school. Obviously it was upsetting the other students and parents.

So there you have it friends. We killed day of the dead. On Monday k-4th immersion had a short review of dia de los muertos as a holiday in Latin American culture and then hit up our state writing standards by writing to someone who had died. The end. No pan de muertos, no music, no sugar skulls, no plaster skull necklaces, no tissue paper marigolds, no paintings of skeletons dressed up to sing and dance.

Worst of all, this one one of the few events each year where we KNEW that a LOT of parents would show up at the school bringing pan de muertos, jugs of fruit punch, chips, salsa and if we were luck some early season tamales so that they could dance, eat and make art their students!!!

I'm livid and I know plenty of you are going to suggest going to talk to the PTA...oh wait you mean our non-existent PTA? Or that the parents should get together and rally to save the event. But the honest truth that I have learned is no matter how smart and sweet the parents of our duel immersion students are, that if they are recent immigrants (and most are) that they are totally uncomfortable dealing with school admin and only come to school events if they are linked to the immersion program. I know that some of our students are lets say not here on permanent stats and I'm sure the status of many of their parents is um...unsecured. I don't care how you feel about immigration issues. All I can tell you is that if you are nervous about your status in the country or have recently received your citizenship or originally are from a place where the school had no indoor plumbing that you are not going to go fight the two tall white men that run the school over a party.

There is a divided within the immersion teachers right now. Half want to raise a stink and the other half say they need to respect the Principal and find a different event to have for the immersion program. Of course my answer is bring back the harvest dance AND day of the dead. That anytime you get families into a school that you are winning. That anytime the kids are having a fun time at school and feeling like they are part of a community then you are going to have a stronger school. But who's going to listen to me. Someone get me a tamale please :(
Posted by Mrs. Art Teacher at 3:32 PM