Once we get past the first few weeks of the school year we will start our study of art from around the world and through time. This is a series of lessons that I have been working on for about 6 or 7 years now. I have a two week summer camp version of art around the world, a year long elementary version that I am working on right now and a half year long middle school version that I have used before and will tweak for this year to make it year long.

Of course when we talk about pre-historic art we have to start with France and the Caves of Lascaux. This website is phenomenal and allows you and your students to tour the many caves of the Lascaux area and learn about the history of the paintings and the discovery of them.

My 6-8th graders will go on a web scavenger hunt to learn more about these caves. I will post the scavenger hunt questions later.
This website is particularly nice because it has a time line that features other caves int he Lascuaux area...ones even older than Lascaux. The time line, and photos, start with Chauvet which is dated at about 32,000 BC! Lascaux is dated at around 17-18,000 BC.

Next we will watch the Sister Wendy Clip. Then talk about the spiritual nature of the caves, the power animals per say. We will see the use of power animals in many native cultures throughout the year.

For 2nd-5th this is when we stop and do our art projects.
For 6-8th this is when we stop and do the web scavenger hunt.
This year I am also going to seek permission to show some fertility figures such as the Venus of Willendorft. This figure was found in modern day Austria and was made between 24,000 BCE – 22,000 BCE. People have debated round and round in circles about the exact meaning of this statue, the only point they can agree on being that she is a fertility figure. I like her as a class discussion piece because she is A. Sculpture, B. Sculpture in the round, 3. Portable (shows the nomadic lifestyle) 4. clues us into how important having a close, large, fertile, family would have been to survival.
Questions for the Venus:
*Why make a statue of a pregnant women?
*Why would it have been good to have a larger family during that time period
*more people to hunt, defend family, if someone dies still have a functioning group
*What were men and women's job's during that time?
*Why do you think she doesn't have a face?

Now as much as I want to show this work of art it will depend on me getting permission from the principal...boobies and all, and how mature each class is. I might do more of the talking then having a group discussion for the first question for Venus.
I have found a few more "school appropriate" shots of the the Venus.
I have been working with middle scholars long enough to know that this viewing will be saved for AFTER our art projects are done or I will have a pack of boys drawing naked women all over their cave art. 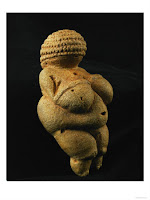