I took a really great class this summer that focused on art through history for kids. During this class I was introduced to a new/ old book (1988) by Jan Brett called The First Dog. First dog is about a cave boy named Kip who is traveling home and keeps encountering dangers, he is forewarned about these dangers and saved again and again by a wolf who eventually becomes Kip's companion and therefore the "first" dog. Here is the official description of the book and a picture of the cover. 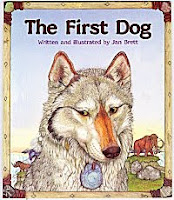 Between 35,000 and 12,000 years ago, as the last of the great glaciers of the Pleistocene advanced and retreated over the grasslands of Europe and the New World, people like ourselves--Homo sapiens sapiens--began to flourish. Hunters and gatherers, they wore clothes made of animal skins, had shell and bone ornaments and used such tools as spears and knives. They made music and were prolific artist. This was a time of exceptional artistic achievement and technological advance, and it may have been during this period that the first wild animals were domesticated.
Jan Brett has created an appealing story from this possibility, setting it in a breathtaking Ice Age landscape populated with animals that coexisted with early man in Europe and the New World. The images and ornaments of her borders were inspired by the cave paintings and artifacts surviving from this time.

I think this book will really appeal to my students for several reasons. First they really love dogs and stories of animal companionship (many of my students feel animals are more trustworthy than their human counterparts...which frankly, and sadly, is often true). Second this book features a independent and adventurous young child who has been out having a grand adventure...WITHOUT the aid of adults. What child doesn't like that idea. Third Jan Brett's illustrations are so appealing. Not only does she do wonderful illustrations, but each picture is surrounded by boarder images that let you go deeper into the story.

One of my favorite parts of this book is the stone or clay medallion that Kip gives first dog to show that he was part of Kip's clan. One of the projects I'm going to do with my students is have them make a "clan" medallion for their own family.
Posted by Mrs. Art Teacher at 12:00 PM